I Took a Gap Year and Survived: “I Knew I Wasn’t Ready, Academically or Emotionally”

Considering a gap year? Here’s what you need to know…

I remember the feeling so distinctly. I had just turned 17. It was spring and I was finishing Grade 12 and would soon be graduating high school. I had spent years pushing myself to fit the mould that I felt everyone else fit so easily. I remember standing there in front of my classmate; blushing, feeling small, standing with my friend by my side, her hand on my back as a gesture indicating her solidarity.

“I’m actually not going to school in the fall,” was all I managed to get out.

I had spent many years feeling like I was holding on by a thread in many of my courses. To be honest, I had no passion or motivation for the academic school I was enrolled in. When the move from middle school to high school was happening my parents tried to help: “Why not go to Northern—there are much more opportunities for courses in the arts and trades,” they encouraged.

But I wanted to move with my friends, I didn’t want to change course. I wanted to fit in, to blend in.

Back in high school, everyone had made their selection for their future schools. Western, Queen’s, Laurier seemed to be the norm. I had spent the last couple months in denial—pushing to keep the façade that I too was ready for the next big step, to move away and continue pursuing academics to get to my dream career. I went through all the motions—applying to all the expected universities, letting my parents spend hundreds of dollars on applications that were submitted sans excitement, but instead with fear and dread.

But the charade was up. I was about to be busted.

It was at a party at my friend’s house. Conversation had focused around everyone’s futures, finding out who would be going to the same schools, what residences they would be moving into. I remember standing with one of my best friends when a guy came up to us. Up until this point, I had been doing everything right when it came to university prep—I had my “dream school” but had applied to the other standards to keep my options open. I was going to take a *promising degree in general arts.* All these decisions made me feel like a fraud. In truth, I had no interest at all in the reality of that choice. I had no idea what I wanted to study, or, worse, what I wanted to be. I had spent my high school years in courses that didn’t interest me at all, just pushing to get to the next step. But I felt like I had no choice or authority in the decision.

I remember watching his face drop as he stuttered to find something to say. At that same point, I remember the heat in my cheeks and the threat of tears behind my eyes. I remember my friend protectively rubbing my back.

He said, “We’ll all be at Laurier next year together—have you found out what residence you’re in?!” And with those words, it was all over. I remember feeling so ashamed as the truth finally came out: “Oh, I’m not going to Laurier next year… or any school.” I remember watching his face drop as he stuttered to find something to say. At that same point, I remember the heat in my cheeks and the threat of tears behind my eyes. I remember my friend protectively rubbing my back. I felt so much shame.

I knew the way people from my school spoke of students who didn’t immediately attend top universities out of high school, because, regrettably, I had been one of them. Conversations debating the seemingly obvious failure: “If you don’t go straight to university from high school, then you’ll lose motivation and never make it.” All those stories; those narratives that were written for others were suddenly on me. 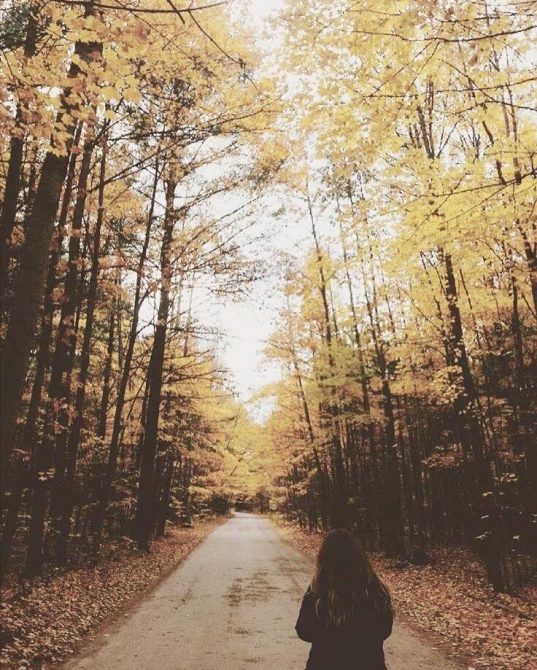 The only part of the whole situation that felt wrong was my public shame. The funny part is that making that decision to not go to school was the most freeing choice I ever made. I knew I wasn’t ready, academically or emotionally to move away and start ‘pursuing’ a career that was unimaginable at that point.

The funny part is that making that decision to not go to school was the most freeing choice I had made to date. I knew I wasn’t ready, academically or emotionally to move away.

I remember the feeling of relief when I made the choice. I also remember my parents supporting my decision and the excitement I felt about the chance to stop and breathe. I didn’t think I was doomed, in fact, I knew that if I had gone to school at that point I would have set myself up for a huge crash. I wasn’t part of the common narrative—I wasn’t going to school because I was a failure. I knew I wanted to go to school eventually, probably the following year. But I felt like none of that mattered, I couldn’t walk around everyone in my grade and explain how great I felt about that decision (nor did I want to). I just had to let go of my worries about what my peers would think.

So that was it. The story was out—the three of us stood there in awkward silence, no one having any idea what to say. I remember the look on both their faces and my friend, lovingly rubbing my back as if I needed to be consoled and comforted because of my “failure.”

I realize this feeling is not everyone’s experience. I am in no way trying to say that everyone in high school feels the way I did, but this is for the people who do.

Whether I made it to post-secondary after that decision for a gap year or not is irrelevant. I was going to go on and write about what my life looked like and where it took me after that choice but it’s not necessary. I made the decision that was best for me at that time and that is all that matters. I got off the train, even if I had to jump and get a couple bumps and bruises in the process. If there is anything I wish I had done differently, I wish I had the confidence to let that decision shine through earlier. I didn’t know any better, I really did think it was shameful, but it wasn’t.

I got off the train, even if I had to jump and get a couple bumps and bruises in the process.

What I want you to know (in the least creepy way possible) is that I am here to rub your back, not to console you for a quote-unquote shameful decision, but to comfort you in knowing that whether you are going to school next year or not, if you made the decision for yourself, then you are going to be just fine.

I want to tell you it’s all going to be okay, you are not a failure, you are not doomed; this is your life and your path, and there is no one way to walk it.

Spoiler: After her gap year, Seana completed 5 years of inconsecutive schooling, receiving a degree and a diploma (she took a gap year between those two as well). She eventually landed herself safe and sound here at SLN, working in all things data and research. She’s the token vegan and makes up beer-pong rules as she goes.