Before becoming an on-air news reporter for the CBC, Alison Chiasson flunked out of Western University.

Which is weird. I knew Alison in high school. She was a total overachieving keener. Then at Western, Alison hosted an on-campus talk show called The Big Purple Couch. I always just assumed that if anybody had their life figured out, it was Alison Chiasson. I wouldn’t have guessed that she was on academic probation and about to spend the next year struggling to figure out what to do with her life, sans university degree.

How do you go from being booted out of university, to landing your dream job? You ask.

In Alison’s case, you ask to cover a story about a New Brunswick strip club.

Editor’s Note: This interview was originally published in 2016 and while certain hiring processes may have changed, the overall advice for breaking in, how to climb the corporate ladder, and landing a job as a CBC news reporter remains the same.

What did you go to school for when you went to Western?

I went for MIT: Media, Information and Technoculture. What the hell is technoculture? We never found out.

“It became really apparent to me really soon that I was out of my league in academia.”

I would be in lectures and my mind was racing, I couldn’t focus at all. I tried to find more corners to cut so I could find more time to work on The Big Purple Couch.

Tell me about Purple Couch.

I always loved news. So I thought maybe this was the thing that got me re-engaged. And it certainly was. It got me excited about working in journalism — with cameras and thinking about production.

“I was taking a media course, but we weren’t ever going to touch a camera and that did not compute with me.”

But it didn’t help me with school at all. Not working with my hands just didn’t feel right. I was taking a media course, but we weren’t ever going to touch a camera and that did not compute with me. So I thought, “Screw the program. I’m going to work on this talk show as much and as long as possible.”

It was the first time I could edit my own stuff and talk to people and stand in front of the camera. I would barely go to class. I put all of my energy into stories and new things that we could do for the show. The guy who was hosting it graduated and I became the host. When that happened I was like, “Forget you, school.”

Is there anything you apply from that Western program to your job now?

Not at all. It was totally Big Purple Couch.

After year three and screwing up academic probation, I had to move back to Georgetown with my parents for a year.  But that entire time I was working on a demo. I took it to Ryerson, and they told me I needed a BA for their program. So I thought, let’s give college a go.

“I don’t think I need a BA to know how to do this. You’ve just got to be human and curious.”

I took that demo to Humber and explained, “Look, I don’t have a BA, but this is exactly what I want to work in. I don’t think I need a BA to know how to do this. You’ve just got to be human and curious.” 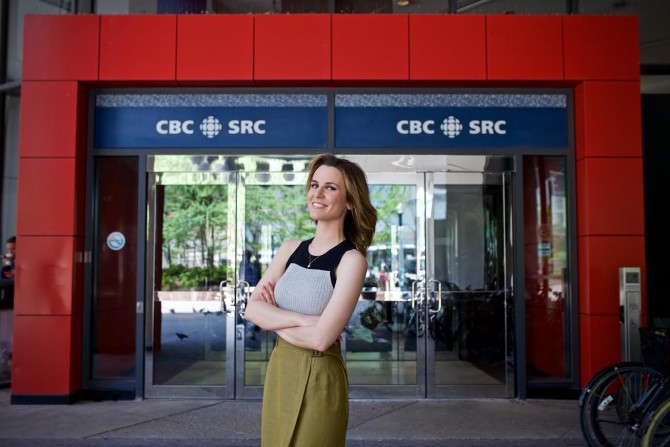 What was your first job at the CBC?

The first gig in news is always as an EA (editorial assistant), you’re rolling teleprompter and printing out scripts and handing them off to the news anchor and then you run away after the commercial break, that’s it. There’s nothing editorial about it, you’re just a monkey on a machine.

Once you get that editorial assistant job out of the way, eventually, if someone has an interest in you, and is maybe grooming you, then you’ll get a chance to be a chase producer. You work on pumping out guests for the anchor, so like with Fort McMurray for example, I’d be in charge to get a new guest at Fort McMurray who was on the ground, in the fire, who saw something or who was rescuing people.

There’s a lot of work that goes into “how to find someone” and either you get that or you don’t. For whatever reason, I just didn’t. I stopped getting chase shifts and I was back on teleprompter. I just thought, “this is over.”

Did you feel like that was your biggest fuck up moment?

Oh yeah. When you’re getting chase shifts, you’re pow-wowing directly with Heather Hiscox — you’re chatting with that anchor, you’re brainstorming about how to do this interview with the guest that you booked and it’s just this cycle. And I thought, “I’m not getting that experience.”

So when was your break?

Even though I wasn’t getting the experience, someone said, “Just email somebody in the smaller markets and say ‘hey, I want to report, give me a shot.’” And I thought, “Well it worked for you before” at Humber where I didn’t really have the resume.

“I had never done a news report in my life, no real writing experience, no editorial experience, and they said, ‘Go out and capture a story.'”

So I had a phone interview with CBC New Brunswick, with the executive producer there and he said, “Yeah, come on board, we just want people who are curious!” And I said, “Great, that’s me, boss!” I had never done a news report in my life, no real writing experience, no editorial experience, and they said, “Go out and capture a story”.

They said, “They’re trying to shut down the strip club — the Mayor of Fredericton has a thing against strip clubs — he’s trying to clean up the town.”

The next day, they took my press conference live on the radio, and the executive producer had apparently heard it and said, “Who the hell IS THAT talking to the mayor?” and he sat me down in his office and he said, “You got it kid. I heard that on the radio and I thought, “who the hell does that person think she is?” He said, “You can do anything in this business you want.”

So basically you landed your job through, passion, grit, hustle and fearlessness? What the hell did university have to do with that?

Yeah, you’re absolutely right. Because [in school], you’re just sitting there and you’re drooling and you’re writing. I learned hard journalism at Humber College. But to be a journalist, you’ve got to have hands-on experience. You just have to. And I’m still learning so, so much.

A lot of people, once you ‘get your foot in the door’ — you settle. You’re like, “I’m in!” You can’t just hope for somebody to bring you in. I felt I needed to prove myself extra hard because I was a dropout and working at CBC news.

“I thought that some day, someone was going to figure out that I was a fraud and that I shouldn’t be here, but they can’t tell me I didn’t work hard.”

I thought I had the word ‘dropout’ stamped on my head, forever. I thought that someday, someone was going to figure out that I was a fraud and that I shouldn’t be here, but they can’t tell me I didn’t work hard.

If you were having a conversation with 18-year-old Alison, what would you tell her?

Learn with your hands. Get dirty and make mistakes. Me in high school — I was very eager. I was such a perfectionist that I got in my own way. I needed to relax and I needed to listen.