“School is Important, But it Isn’t Everything.” Students Stunned By Professor’s Email

You know how sometimes, you just need someone to lean in close and whisper that they believe in you? That’s Jessica Langer.

At the end of the fall semester in December, Langer sent a sweet thank-you note to her students in the Marketing the Creative Industries class at Ryerson University; when one of her students took a screenshot and tweeted the letter, it quickly went viral. Within a week, Jessica had been featured on Buzzfeed, A Plus, Metro.co.uk, the Daily Mail, CTV News… even the Brazilian version of Marie Claire. Fantástico! 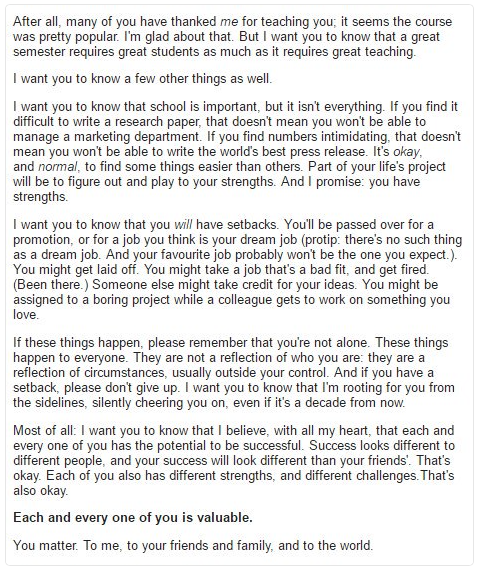 Of course, the timing was a little overwhelming: Jessica had just accepted a full-time position as a professor in the Honours Bachelor of Public Relations Management program at Centennial College. So as much as she’d enjoyed teaching at Ryerson, her January was going to be busy, meeting new students and getting her feet wet in a new program.

Being lucky enough to know Jessica personally, I put on my Student Life Network Interviewer hat (which looks suspiciously like a propeller beanie) and caught up with her for sushi during her first weeks at Centennial to discuss virality, social media, and life as a professor. 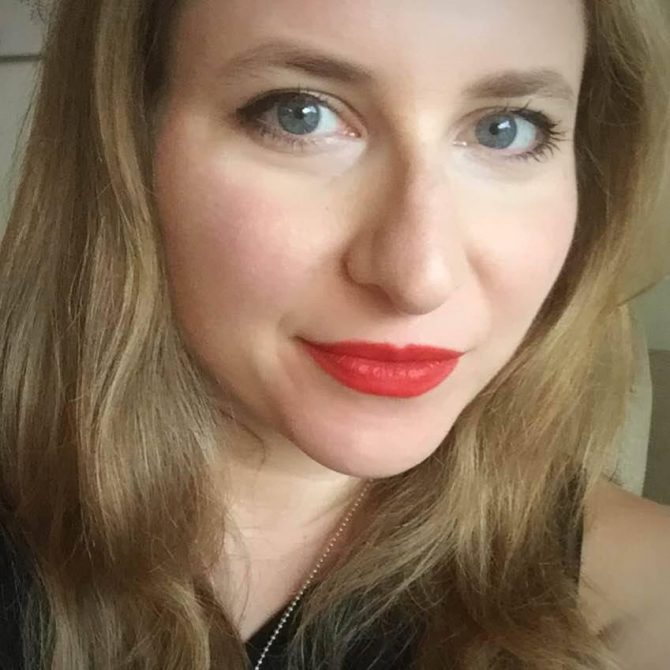 Did you have any idea that the letter would get the attention it did? You wrote it just for your students, right?

“I had no idea at all! Yes, this was a letter I wrote to this specific group of students, and it was in response to a lot of concerns that these students had shared over the course of the semester: worries about their future direction, worries about the job market, worries about marks. They are all so talented and they were a really engaged group, but they were also anxious… and I don’t think that anxiety is unwarranted. The creative industries are a difficult set of businesses in the best of times, and with the economic uncertainty (not to mention the global political uncertainty) we’re facing nowadays, their fears aren’t unfounded.

And at first I was shocked that it got as much attention as it did. But when I think about it, I’m not actually that surprised. A lot of people, students and otherwise, are anxious about what the future will bring. Everyone experiences insecurity and worry, and these aren’t the most stable times, and so I think it was important for people to hear from someone else that they would be okay, that their worth isn’t dependent upon anything external to themselves.

I think it’s a message a lot of people need to hear. Heck, I need to hear it. That’s why I sent it to my students. It was a letter I wish someone had written to me.”

Me too! Particularly in my second year slump, that’s when I started to really worry about failing classes. You spend a fair bit of the letter talking about failure; why is that?

“Because it’s something I think we’re all afraid of, and it’s something we all experience. Even though there’s been a lot of discussion in the business press about the value of failure, it’s hard to personalize that. And I think it’s especially difficult, maybe, for creative folks. We tend to take failure at a task and turn it into failure as a person: the difference between I failed and I’m a failure.

I have a fairly engaging classroom style and I’m also reasonably young, and so students sometimes relate to me in that way: they see me as someone who’s a little further ahead than they are, but on the same track, and so my “success” is something they can work toward. And by sharing my own experiences with difficulty and failure, I hoped to help them understand that these are things that happen to everyone… even people they look up to.”

Speaking of looking up – things are certainly looking up for you. You’ve recently made the move to Centennial College now. Why?

“I absolutely loved teaching at Ryerson, but it was a temporary contract – a lot of academics teach on temporary contracts. I was teaching there and running my own consulting practice, and then I heard about the position at Centennial, which is a full-time permanent professorship.

Centennial is an amazing school, and the program is a really exciting one: it’s an Honours Bachelor’s in Public Relations Management, and it’s very applied but also very rigorous. Here at Centennial, I have the opportunity not just to teach but also to get into curriculum development, industry outreach, the kinds of things you don’t get to do when you’re on a temporary contract. I’m also privileged to have some really accomplished (and friendly!) colleagues, and really smart, engaged students.☺”

Alanna has an Honours BA in English, Linguistics and Philosophy (University of Toronto), as well as a Bachelor of Teaching (Southern Cross University, Australia). She writes for SLN and lives in Toronto with her family.