How to Land a Job on Shark Week… With Guts

Blake Glasbergen grew up obsessed with the Discovery Channel. Now, he works for Daily Planet. With a passion for TV, but no patience for science class, how did Blake, a “not necessarily sociable” kid end up producing segments for the infamous Shark Week?

Blake is no lucky optimist. He jumped in head first, stuck to what he loved, and worked hard. Most importantly, he grabbed the bull(shark) by the horns (fin) — no matter how uneasy it made him feel.

Right out of high school, Blake felt pressure from his dad to go to college, so he took something completely inside his comfort zone; Visual Arts. Halfway through the year, he dropped out of the Sheridan College program, and took a year off. Blake eventually gave Sheridan another shot, this time in Broadcast Journalism. Within the first week, Blake was hungry for opportunity.

“That was the jumping off point. Showing that I really wanted to do stuff.”

How were you different in your new program?
The first week I was in the media program at Sheridan, I met this guy at a club party. The next week we went out and shot a rap video in Brampton just because I wanted to start doing stuff right then and there. That was the jumping off point. Showing that I really wanted to do stuff. I was just trying things because I had the opportunity to try them.

I spent a lot of time helping my media-arts friends with their projects — that’s how I spent a lot of my time in college. I was way more into my side projects. I was never firing at 100% on the work I had to do for my classes.

“I followed every single person I could ascertain was a producer on Daily Planet, on Twitter.”

How did you find that person’s name?
I literally just went on the Discovery website and found her name. It’s still there, by the way. Week after week, I would send her an email. I followed every single person I could ascertain was a producer on Daily Planet, on Twitter.

How did you do that?
It was surprisingly easy, because everyone at CTV has a tag that they put on the end of their name, so I was just able to use Twitter Advanced Search to find anybody who belonged to that group. I watched what they were doing and what they were saying, and it kind of gives you a behind-the-scenes look at the community and who they are. Which helped a lot.

Because my teacher also had a connection with them, I was pressing my teacher to go after them at the same time I was going after them.

So you got in through… belligerence?
Well, persistence. I was classy in the way I did it. I wasn’t hounding them. I wasn’t being annoying. I would say that, every week, that’s a good space of time to send follow up emails.

What would you say in your follow up email to them?
I asked about the internship and if there was still an opportunity — if we could talk more about it, maybe just give me call? I had a “call tactic.”

“Essentially, they were looking at my personality over my actual skills as a journalist.”

What was the interview like? Did you bring anything to the interview?
I had stuff prepared. My teacher had really put into my head, “have a portfolio ready, with certain stories you would produce if you were working on Daily Planet.” I never used that. When I was in the interview itself, it was super informal. Essentially, they were looking at my personality over my actual skills as a journalist.

Fit is very important. You’re in a tight-knit group and if they don’t like you, they’re not going to hire you as an intern.

But, obviously, you were the right fit?
Yeah, I got a call afterwards and got the internship. And then I went for a ‘shadow day’ before my internship started — to shadow interns who were already there… and they weren’t really doing as much as I thought they could have.

Your big differentiation point is that you asked?
Yeah, and I stood out with my group of interns. We were a three-person unit and we were good. One of the people who interned with me is now our correspondent in Vancouver, and develops stories for us there. We were really on the ball. We were scheduling each other for shifts. Showing that we could work as a team, was a huge benefit to all of us. 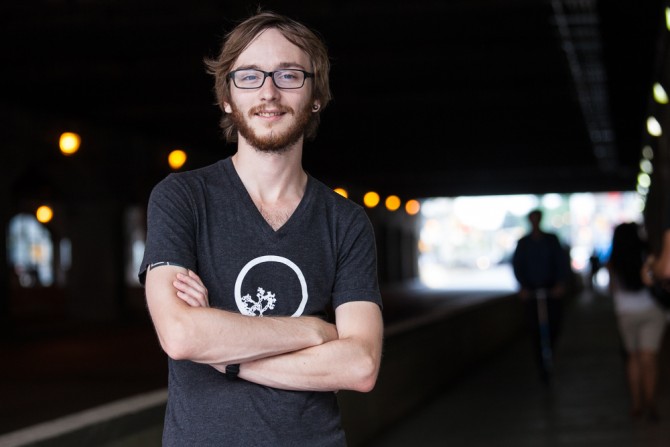 “You need to be able to take on new responsibilities that you never thought you were capable of doing or would be expected to do before.”

But I would say, being in Broadcast Journalism, my program gave me an idea of what to expect, it gave me tools that would help me understand the future lessons.  I don’t think I was directly applying most of the things I learned in school, but I was indirectly applying all of them.

School gives you the framework to learn. It taught me to be adaptable. Flexibility is so important. Especially in an environment where it’s tight knit and everyone has a lot of stuff to do, and someone may not be there the next day. You need to be able to take on new responsibilities that you never thought you were capable of doing or would be expected to do before.

How did you change that internship into a full time position?
In the summer, they said, “You’re an archivist. What you do is you take footage and log it in your computer. BUT, while we’re in the summer, we’re not really doing any shows right now. Could you help build our Top 10’s for the following year? Just for the summer, we’ll keep you on full time, and then when we start the regular season, we’ll bring you back to a three-day work week.”

That summer, I made a couple segments. They turned out really well, and they never spoke about me going back to part time. They never really said that I was staying on full time, but they never told me that I wasn’t. So I just kept doing that five-day work week, and I just kept making those segments.

I thought, “If they don’t tell me to go home, I’m here working.”  So that’s what I did, and they kept on liking what I was doing to the point where they said, “We’re changing your position to a full time position, because we don’t want anyone else to make these segments.”

What’s it like to work on something like Shark Week? Is it a lot of pressure?
It’s not that bad. Surprisingly, I don’t feel a ton of pressure. We think about Shark Week all year. So when we see a shark story at any point, we file it away under Shark Week. It’s not really a down-to-the-wire thing. But I will say, the enthusiasm that people have for Shark Week is super fun. It gets everyone involved, everyone is talking about it. The energy is incredible. But we’ve been doing it for a long time. Sharks are freaking awesome, but I think I’m ready for Bear Week to be honest.

“I want to find the best people, the best characters, and just tell stories.”

What’s next?
Success for me in five years would be to have been to at least four different countries and to have told a multitude of stories in those places. I want to find the best people, the best characters, and just tell stories.