How I Landed A Job at Global News… Immediately After School

Mollie Brown shares how she broke into broadcast media by landing her first job at Global News.

Just over a year ago, tweeting, posting, ‘gramming, and snapping became more than just a hobby.

But let’s back things up.

Graduation. Your future is bright. Your dreams are big.

You’ve worked hard for the past however many years. And you’re chomping at the bit to have a diploma in your hand so you can throw that cap in the air. You’re ready to enter the workforce with your head held high.

What I’ve just described is Elle Woods’ graduation scene in Legally Blonde. Or maybe the scene in She’s All That when Freddie Prinze Jr. shows up ass-naked, wearing nothing but a celebratory sash.

That was not the case for my graduating class.

“I was constantly reminded that I was entering a tough, competitive, some even said dying, industry.”

I had spent the last two years in the Broadcast Journalism program at Sheridan College in Oakville Ont.

And I was constantly reminded that I was entering a tough, competitive, some even said dying, industry. So as my program neared an end, I didn’t have much confidence that I would be walking out of a classroom and into employment.

So how did I go from student/unpaid intern to paid employee over night?

Like with many programs, the final hurdle in my race to graduation was an internship. Letters were sent, applications filled out, and phones… did not ring. I had my heart set on an internship with a very particular lifestyle show. And made it very clear (to anyone who would listen) just how badly I wanted it.

When it came time for interviews, every. single. one. of the people I knew who had applied for this internship were called to come in for an interview. Everyone except for me.

“I couldn’t understand why out of a handful of resumes with identical experience, mine was the only one not chosen.”

To say I was hard on myself is an understatement. I couldn’t understand why out of a handful of resumes with identical experience, mine was the only one not chosen.

Months later, I came to discover that one of my teachers had been asked for a shortlist and my name was not included. Your teachers are paid to teach you, they aren’t paid to like you.

Eventually, I found myself in an internship at Global News…

…all the while accepting that that’s all it would ever be. An internship. So I made the most of it. I learned all there was to learn, showed up early, met as many people as I could meet, and soaked up all the advice and information they had to offer. 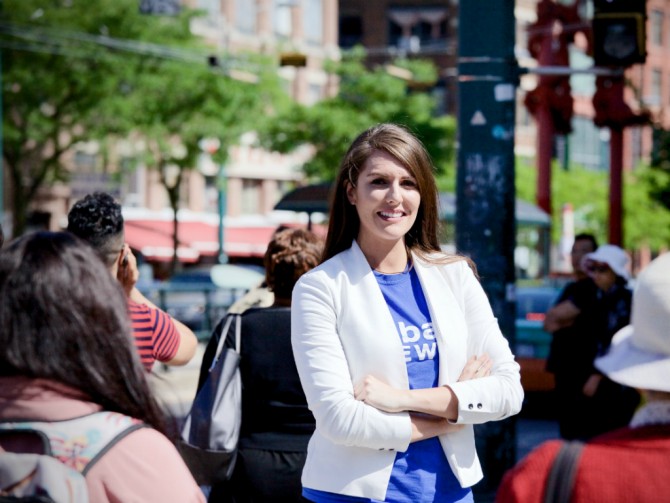 “I was armed with a damn good excuse to be unemployed, “It’s a really tough industry”…”

My lease was up on the shitty, dark, basement apartment I shared in Oakville.

I had quit my bar job. My internship and commuting hours by transit each day left no time to work. I was draining what was left of my student loan. I was armed with a damn good excuse to be unemployed, “It’s a really tough industry”, and had already started day-dreaming of travelling again.

That was until, as my internship neared an end, I was offered a position as Social Media Coordinator. Global News wanted to pay me to tweet, post, ‘gram, and snap. “…You mean my teachers were wrong?”

I may have been homeless, but I was employed.

A year later, as I work alongside some of the best in the business, I hardly feel like I’m in a position to offer advice on landing a job in your industry. But here is what I do know.

1. Get to know your coworkers and make yourself useful.

If you had a stack of 5 qualified people, with identical skills, and you knew you were potentially going to be working with one of these people for years, wouldn’t you start thinking about whether or not you actually get along with them?

In the beginning of your internship or you career, your technical skills matter the most. But as time goes on, those technical skills start to matter less because there is a stack of resumes from people with those exact same skills. How you interact with people starts to matter a lot more.

2. Accept and anticipate that your goals and dream will change.

Social media was not and is not my “dream job.” If you love the company and a position opens up, jump on the opportunity. Get your foot in the door. You’re broke, remember?

When I entered my program, I was dead set on being a news anchor or an entertainment reporter. I wanted to be on TV. Not only am I not on TV (clearly), but the more I work in the industry, I’m not sure being on-air is even a goal of mine anymore.

Moving forward in my career, one regret I have is not taking full advantage of all there was to learn while I was in school. I was so sure I wanted to be on-air that I wasn’t as open to perfecting other skills such as video editing — something that I wish I was better at now that I am in the industry.

3. The real education really does begin after college.

It sounds cliché, but it’s true. In reality, everything you’ve learned in the hundreds of hours you’ve spent in class is largely worthless in the real world. Okay maybe that’s a bit extreme (I tell myself as I drown in student loans).

“In reality, everything you’ve learned in the hundreds of hours you’ve spent in class is largely worthless in the real world.”

One of the best pieces of advice I received while in my internship was from a camera operator. In response to some “constructive criticism” I was once given from a teacher, the camera operator told me, “Your teacher isn’t working in the industry, YOU are.”

Learn as much as you can while you have the chance. Be the first to arrive and the last to leave. Ask questions