The Highly Flammable Intern: The True Story of How I Burned Out

This post is an excerpt from Hamza Khan’s upcoming book, The Burnout Gamble: Achieve More by Beating Burnout and Building Resilience.

I work in marketing — an industry predicated on perception — where day-in and day-out I’m thinking about the importance of brand consistency.

In order for a brand to work effectively, it must reconcile the gap between how it sees itself, how others see it, and how it wants to be seen. Throughout my career, I’ve developed a reputation for being extremely focused and productive. “If you want something done, give it to Hamza,” was a sentiment felt in my former workplaces.

And I loved it.

It became my thing. The nicknames I earned over the years would make my circuits tingle: cyborg, robot, machine, etc. But in order to keep my industrious brand intact — to keep that perception gap tight — I had to erase from my narrative the events of November 10th, 2008. I took a keen interest in music marketing, and soon picked up freelance gigs creating music videos for up-and-coming rappers…

I honed them by making short films and music videos, while finding ways to promote my work across the burgeoning social web. During this time, I took a keen interest in music marketing, and soon picked up freelance gigs creating music videos for up-and-coming rappers while cutting small business and nonprofit promotional videos.

As an English student at the University of Toronto, I felt insecure about my career prospects and enlisted in a bridge-to-business program at the prestigious Rotman School of Management. Our final assignment required us to create a marketing plan for an up-and-coming Sony Music Artist, Zaki Ebrahim.

Little did I know that I had been preparing for this opportunity my entire life. As a wide-eyed child enthralled by the films of Steven Spielberg, then as a teenager inspired by the music videos of Hype Williams, to a young adult driven by the success of moguls like Diddy, I brought years of accumulated passion, insight, and experience to this project.

Growing up in a lower-middle class Muslim household, the son of hard working Indian immigrant parents, only served to intensify my imposter syndrome.

I bested a cohort of wicked smart and highly accomplished peers to win the case competition and earned myself a rare internship with Sony Music’s Director of Partnerships. Growing up in a lower-middle class Muslim household, the son of hard working Indian immigrant parents, only served to intensify my imposter syndrome.

For a number of reasons, an opportunity like the one I had been presented seemed foreclosed to someone with my multiple identities. But there I was — I had beaten the odds.

I had earned my shot. There was no way I was going to let it go to waste. I was committed to squeezing every last drop out of this opportunity. Eager to please my boss, I regularly went above-and-beyond the call of duty.

I gradually pushed my personal boundaries until a few months in, when I worked through three straight nights leading up to November 10th, 2008. All while juggling full-time school, part-time work, freelance graphic and web design, and volunteer commitments.

My days would start at 5:00 am, jostled from a short power-nap. Fuelled with my first of many coffees, I’d hurl myself into playing catch-up on the cascade of tasks I was being crushed under. As the day progressed, I’d trade my coffees for energy drinks. I’d start each of those days by going to university, sitting in my classes, working on graphic and web design projects, while partially listening to my professors. I’d then take a 1.5-hour bus ride to my internship where I’d clock in 5–8 hours of work, followed by a 1.5-hour bus ride back to either school/home where I’d resume my freelance projects or tackle some schoolwork. In the mix, to earn some extra cash, I was also picking up shifts at a department store as well as a health foods store. Consistent sleep wasn’t an option, until my body decided otherwise. And on the morning of November 10th, it did.

And with what little time I had to spare, I was involved in two volunteer opportunities — one was a volunteer consulting network, and the other was a business workshop for priority neighbourhoods. Insecure that I wasn’t living up to my parents’ dreams of me becoming a doctor, lawyer, or engineer, I committed myself to overcompensating. Consistent sleep wasn’t an option, until my body decided otherwise. And on the morning of November 10th, it did.

I started this particular day at the Sony Music Entertainment offices, eager to complete media kits for a band whose show I was working the previous night. I remember sitting at my desk, dizzy, feeling an intense wave of weariness suddenly come over me. My vision began to cloud, and a haze of reddish-orange began to occlude my vision.

I felt nauseous and short of breath at the same time. I stood up and felt my legs buckle.

Losing my sense of balance, I stumbled out of the office and into the corridor toward the bathrooms. I hobbled into the handicap bathroom and locked the door behind me. I stared at my reflection in the mirror and could barely recognize myself — the face looking back at me was that of a stranger’s: ghastly pale, eyes completely glazed over…the face of someone who had less than an hour of combined sleep over the past 72 hours.

Feeling extreme heat course through my body, I stripped off my shirt and laid down on the bathroom floor. The time was approximately 9:00 am.

I woke up some time later to the sound of incessant banging on the bathroom door. Fuzzy at first, the knocks become sharper and more urgent. I slowly fidgeted for my phone to find over 50 messages and missed calls.

“Hello! Open the door!” a voice from outside yelled.

I groaned in pain. My joints were stiff from laying on the cold and hard tiles, and there was blood-filled vomit on the floor and on my sweat-soaked shirt. It was an ugly and embarrassing scene. It took a few seconds to register where I was and to come to terms with the fact that the unruly mess on and around me was of my own doing. I remember feeling disoriented and afraid. I looked at the clock: it was past 10:00 pm. I had been out cold for more than 12 hours.

I opened the door to an infuriated janitor.

“I’m so sorry,” I mumbled. I immediately dashed back to my desk, grabbed my things, and went straight home. The only other person in the office at this time was another overachiever, an overworked video editor who was so dialed into his work that he didn’t hear the door opening and slamming shut, and my heavy footsteps running to and from my desk.

I vowed that nobody could know what had happened. Not my boss. Not my family. Not my friends.

I can’t tell you what exactly happened to me that day. The truth is, I don’t know. I’ve described the episode to various doctors in the months spent writing this book, and the range of explanations go from extreme dehydration to a silent heart attack. I was barely 23 at the time. I felt ashamed and afraid by what had happened.

On the bus ride home, strangely enough, I remember committing to repressing that memory for as long as I could. In my self-talk, I vowed that nobody could know what had happened. Not my boss. Not my family. Not my friends.

“If you want something done, give it to Hamza” needed to be the story. I was relieved that nobody other than the janitor (and maybe the video editor) saw me that night. For my boss, I was able to concoct a flimsy excuse for why I disappeared during the day, and I kept my reputation as a hard worker intact.

Rather than tell him what had happened, or seek medical help, I brushed the episode off as a fever dream and slipped right back into the patterns of overwork that led me to that breakdown in the first place.

I chose to remain ignorant about what collapsed my system that day, and I persisted through smaller episodes of system failure over the years until six years later in December 2014, when the demon finally caught up with me again.

And shortly after, I learned how to beat it.

The Toronto Blue Jays Winter Fest: An Event To Remember

SLN Creator Elise Roopchan braved a snowstorm to attend The Blue Jays Winter Fest on January 18, 2020. Read about her experience! 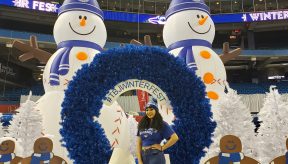