The Toronto Blue Jays Winter Fest: An Event To Remember

Last week while driving home from Atlanta, I was ranting to my mother about the lack of winter events in Toronto. Now, part of this was for selfish reasons (I wanted new content for Instagram). But I was also getting cabin fever staying inside all day, since it was too cold to do anything fun outdoors. Well, fast forward a couple of days later, I was given the perfect opportunity to do both! I had the pleasure of attending The Blue Jays Winter Fest and write about my experience. Thanks, Universe!. So, on January 18th, 2020, I made the journey downtown to check it out.

Despite the intense snowstorm, an estimated 20,000 fans were in attendance at the 3rd annual Blue Jays Winter Fest. This year’s event was jam-packed with fun rides, attractions, tours, and even little photo-ops. Plus, the first 12,000 fans received a free Toronto Blue Jays toque. So naturally, I made sure to get there early so I could get my free toque (definitely worth it). 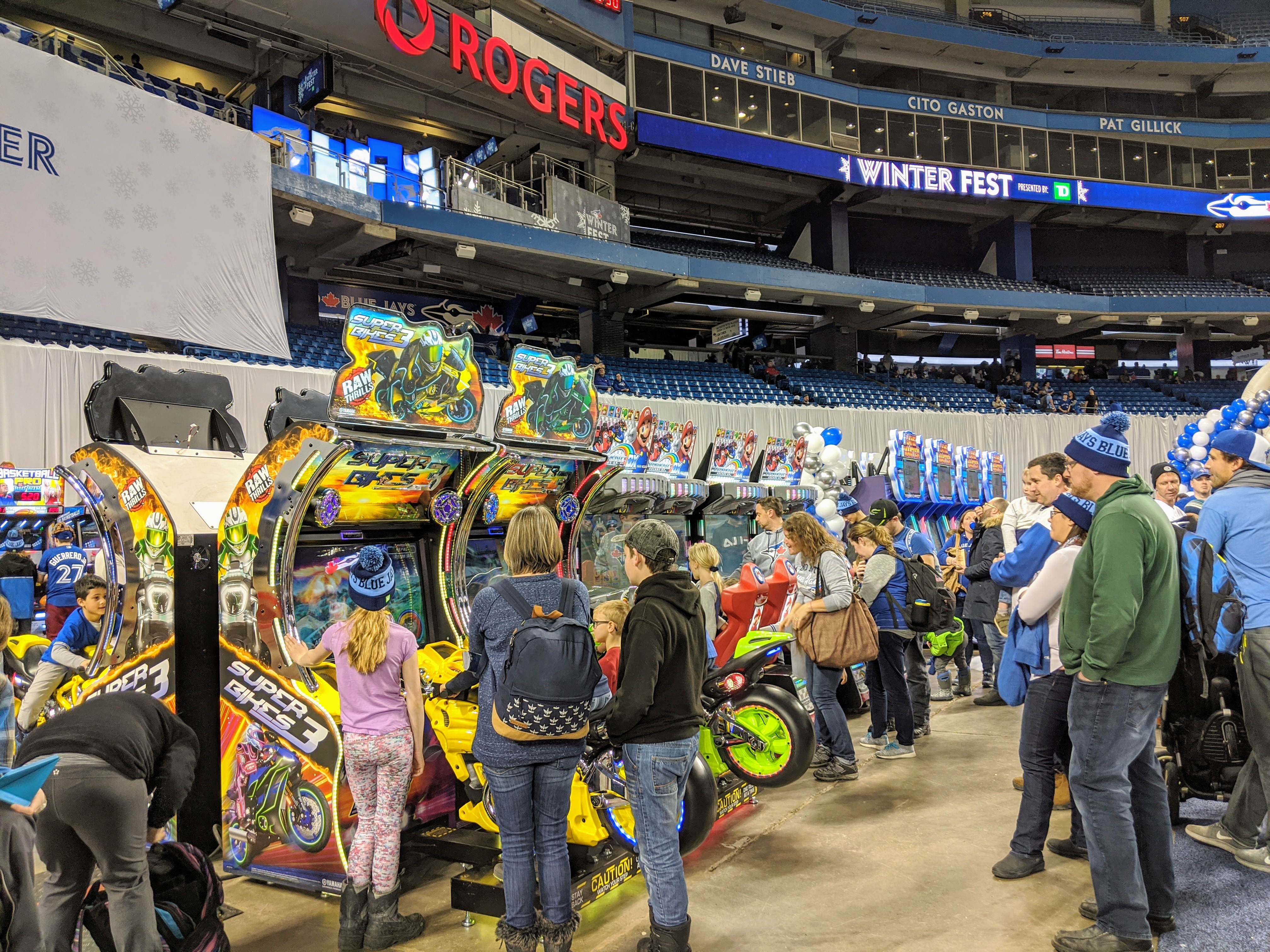 So Much To Do!

I experienced sensory overload as soon as I walked into the stadium—it was filled so many things to see, and so many things and do. There were footlong hotdogs on my left, rides and inflatables on the field, and speakers on the stage. I was pleasantly overwhelmed and didn’t know where to start. Here’s some trivia for you: The Rogers Centre once reported that they sell so many hotdogs in a year that if lined up, it covers the distance of 3,241 stolen bases. How crazy is that!?

However, I decided to skip the hotdogs and get right into the some of the activations. I went down to the field, and what I saw was beautiful—people just having fun regardless of age, enjoying themselves. I saw parents recording their kids jumping on inflatables, couples taking pictures together, siblings playing arcade games, people excited about the autographs they received, and everyone just overall having a good time. Walking around the field, they had many cute setups for pictures—giant snowflakes, inflatable snowmen, even a giant ACE the Blue Jays mascot!

Having finished on the right side of the field, I started making my way around the stage to check out the other side. This side of the field allowed people to go behind the scenes and visit all the hotspots where the players would hang out. There was the dugout photo-op area, where you can go into the dugout and sit where the players sit! The entire day was was amazing. I was smiling ear-to-ear, experiencing an event tailor-made for every type of Blue Jays Fan.

It was finally time for the grand finale: fans had the option to go behind the scenes in the stadium. You could check out the batting tunnels, buy game-used Blue Jays items, be like the groundskeepers and change a real MLB base, and even see the 1992 and 1993 world series trophies! And if you could weave through the crowd, you could even meet and talk to President & CEO of The Toronto Blue Jays, Mark Shapiro.

Here’s another piece of trivia for you: The Toronto Blue Jays are not only the first and only team outside of the United States of America to appear in and win the world series, but they are also the youngest/fastest team to win, having been around for only 16 years.

My personal favourite moment was going to the Toronto Blue Jays Clubhouse. On this self-guided tour, fans were allowed to walk through and look at the training equipment, conference rooms, and even their “break room.” As I walked through the Clubhouse, I realize it was much fancier and spacious than I anticipated. I couldn’t help but think about all the raw emotions that run through this room—the euphoria of winning a game, the pain of losing one, or the hurt of being traded. It was moving and a privilege to be in this same shared space.

All in all, I had a great time at the event. It made me have a deeper appreciation for the Toronto Blue Jays, and for Canadian sports in general. I genuinely hope that whoever is reading this, you can join me at the next Toronto Blue Jays Winter Fest. It’s an experience I will never forget. Thank you to Student Life Network for inviting me to attend this fun-filled event!