Friends with (Career) Benefits: How Your BFFs Could Help You Land a Job

Heads up: It’s not just CEOs and hiring managers you should be impressing. Your own friends could be the ones who shape your career.

My friends helped me get my last co-op job. I earned the interview myself, but they (having worked at that place before) said good things about me to my interviewer.

Likewise, when a friend of mine got an interview at a big-shot tech company (she now works there), I connected her with another friend who I knew worked there, and she put in a good word for her.

My friends aren’t high-up-there recruiters or CEOs, and neither am I. Heck, we’re the bottom of the career food chain.

But we helped each other get real, paying, awesome jobs. Also, as I wrote this story, this conversation happened:

(For context, we’re both twenty-somethings in co-op positions.) 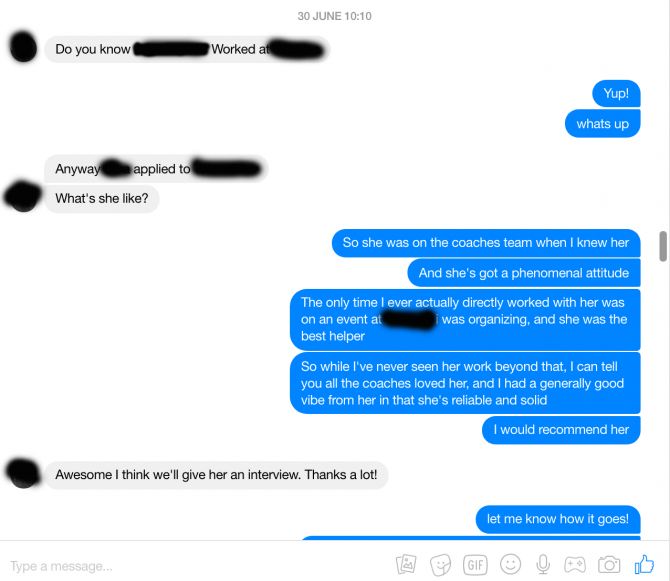 So, yeah. Our friends (and even just our classmates) are as good a career tool as currently-employed, high-power adults.

Why aren’t we talking about impressing them for “career success” too?

An investor friend of mine, Jeff Chapleau, explained it like this. (He runs a startup investing company called Due Good Deeds, so he’s no stranger to the “getting people jobs” thing. It’s part of what he does to help his investments in companies grow—filling them with good people, I mean.)

When asked whether Chapleau only hangs out with other people like him—investors, startup guys—he told me, “No, I usually find age is not a good denoter of a person’s attitude in life or necessarily energy level or intelligence, hence I look for that richness of the person.”

He networks based on three things: someone’s “big heart” (intent to do good in the world), “big brain” (intelligence), and “big smile” (attitude).

For example: Chapleau really likes the waiter at the restaurant I met him at – for the above reasons. When the waiter asked Chapleau for advice on getting his daughter a job, he was happy to jump in with suggestions and insight. Boom! Valuable advice just for being a good human.

Chapleau explained it’s important to help the people you have an affinity for because you never know when you might need their help. “Virtually everybody you meet has something to offer you,” he said. 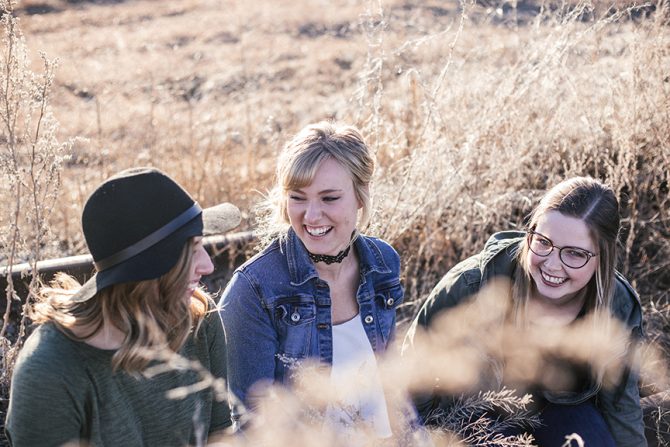 Here’s Why Your Friends Matter

People change jobs all the time

The average person has fifteen serious jobs in a lifetime. That big-shot hiring manager you’ve been pursuing at your current dream company? They could quit (or get fired) tomorrow. And your bartender friend might climb her way to the top of your dream company one day.

Your friends are more well-connected than you’d think

In the world of part-time retail work, there’s a saying: “Don’t write anybody off. Even the kid who just walked in could have his daddy’s credit card on him.” Somebody’s mom or dad or friend-of-a-friend is bound to be in the position to help you (the rule of six degrees of separation much?), and your friends are your ticket to getting to them.

The depth of your relationships makes all the difference

It’s just plain logic that a friend who thinks highly of you would go further out of their way to help you than a stranger. They’ll go that extra mile – unlike a recruiter you’ve never met.

So, what should you do?

Help your friends whenever you can

Giving someone a leg up puts them in a better position to help you later. Also, you’re the average of the people you surround yourself with. By helping your friends, you’re helping yourself be awesome. It’s that whole “You get what you give” thing.

By all means, do nothing for your own assignments, but don’t leave your classmates hanging in group projects. Not cool. Your classmates today will be your industry peers next year. (Fun fact: the people who helped me get my last co-op job got to know me through a group project.)

See people for their potential (Everyone’s got it)

Be like Chapleau. He sat down with a student like me to explain life and success. “There’s always something you can glean, learn or appreciate from someone that you wouldn’t otherwise meet,” he said. “So I look at every contact like that.”

Just because somebody doesn’t fit your definition of success now, doesn’t mean they won’t later, or that you won’t change your mind one day to match theirs.

Go to that party. Join that after school group. Not for the “experience” or extra bullet on your resume, but to meet people. You never know who you might meet.

This goes back to affinity. The people you click and have natural chemistry with. The people you don’t have to change yourself to impress. They’re easiest to build relationships with.

Your friends, right now, are either lite versions of career helpers, or they’re jack-in-a-boxes who haven’t popped yet. Treat them as such.